"The argument has been made that Thomas Edison was working on a ghost communication device – a ghost box of sorts, to contact the dead. However, there are many Edison experts that would argue that it was only legend, a myth that is untrue. They will point out that he neither believed in the afterlife, nor did he believe spirits and ghosts could be contacted through an electronic device. Whatever the truth behind Edison, one has to believe it makes a good story and backdrop to the ghost box. Even more intriguing, some today claim they are in contact with Thomas Edison via the ghost box, but many respected researchers of the latest ghost box technology have yet to make contact with the famous, dead inventor.

Frank’s Box is a ghost box that produces random voltage to create raw audio from an AM tuner, where it is then amplified and then fed into an echo chamber and recorded. In short, ghost boxes such as Frank’s box create audio bits and white noise that ghosts and/or spirits can then manipulate into forming words – real time two-way communication.

...
The ghost box can be used for EVP, as it can be recorded, then analyzed for messages from spirits and ghosts. However, what makes the ghost box unique is that it can be heard audibly through either an external speaker or headset, where responses from the other side can be heard and responded to live – not unlike chatting with someone by walkie-talkie. It does require the user to train his or her ear to hear the messages that are brought forth, as the noise and audio bits can at times be somewhat distracting. But if one experiments long enough with a ghost box, it will become apparent that the audio sound bites and white noise will begin to be manipulated to form answers to questions, phrases and more. For this reason alone, we recommend recording all sessions and listening to them later. Upon playback, one might be amazed at what is captured in the audio. "


The Ghostbox.co.uk the record label: Taken from the website

Taken from an interview with Julian House from Ghost Box from Soul Riot magazine:

"...the best way to put our stuff out was to start a label.. There was such a richness to the references we both shared, not just musical.. It made sense that we could put releases out which had this complete world attached to them.. A set of things united by a design identity, fragments of real or imagined books, collections of images, films, links... Something people can become lost in and want to be a part of.."
www.soulriotmagazine.co.uk/julianHouse.html


Which for some reason brings me to Delia Derbyshire's piece "Dreams" 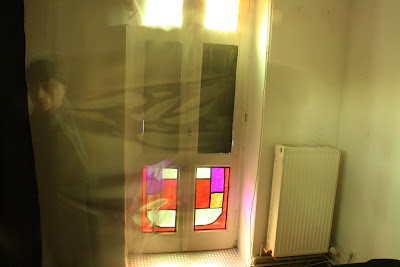 The installation Electronic Ghosts uses modern methods of EVP researchers, specifically the 'Speech Synthesis Method', such as that developed by German EVP researcher and software designer Stefan Bion. In this method, the spiritual entity is given auditive 'aids' of raw audio material, which by influencing these, can subsequently form words with which to communicate with living beings.

The software EVPmaker gives the EVP researcher options as to how they obtain their EVP recordings, one option is to use the program to arbitrarily cut-up and randomise segments of a sound file to build the raw audio material suitable for EVP. (see diagram) Alternatively and more correctly, Bion suggests the creation and use of a set of phonemes, containing every sound element of a given language upon which the random number generator acts and a raw material which is not speech (just phonemes), can be used to synthesize speech, thus aiding communication with etheric beings. The EVP researcher can choose the source of the random number generation such as Pseudo Random Number Generator (Pseudo RNG), Fractal equation or an Internet service.

The physical set-up of the installation can be viewed as an experiment in the aesthetics of disappearance. Where the nature of visual reflections and the phenomenology of the eye have been contrasted with the nature of acoustic reflections and the phenomenology of the ear in this thesis, the rotating mirror is taken as an attempt to readdress the notion of disappearance. By paralleling the visual and acoustic reflection by placing the speaker facing towards the rotating mirror, where the visitor will also stand, the disappearance and reappearance of both these acoustic and visual reflections is an attempt to treat them equally, in spite of the obvious phenomenological differences.

Auditive material has been sourced exclusively from samples of Michael Jackson. The installation is proposed to function on two levels; for believers of EVP, it is intended that a psychic interaction takes place between the sample of Michael Jackson, via the EVP maker and method of speech synthesis, and the spirit of Michael Jackson. Those with hearing tuned to identify EVP may make out words, phrases or messages from the now deceased Michael Jackson and may thus be able to communicate with his disembodied spirit.

For sceptics of the paranormal, the installation can function as an experiment of psychological projection as outlined in Joe Banks' concept of "Rorschach Audio" or auditory illusions akin to those of Diana Deutsch, as the visitor can attempt or resist the formation of sounds into words with varying meaning. The nature of human perception as "unconscious inductive inferences" (Helmholtz) can be emphasised by this process, in which the ears and brain draw on experience and psychological projection to hypothesise our conception of reality. 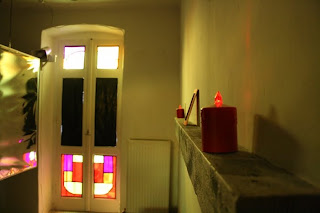