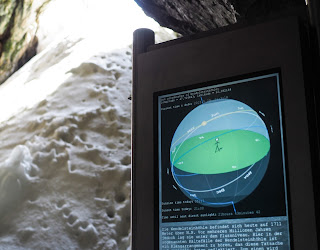 The Wendelstein cave's location today is 1711m above NN in the Bavarian alps, yet geologists have confirmed that the cave was formed by a river running through it. This can only have been several million years ago, prior to the creation of the Alps. In the so-called "Kältefälle" of the Wendelstein cave, the installation "Chronopoetics of the Wendelstein cave" reflects this facts in two ways. Firstly, the geological past of the cave as riverbed is made audible through the sound material which is made of partial-tone analyses of a recording of a rushing river. The partial tones are used to trigger sound synthesis, predominantly sine-like tones which are played back at various extremely slowed down tempos. Secondly, taking inspiration from the field of archaeoastronomy, the larger structure of the composition changes according to the time of day – according to the movement and position of the sun in relation to the cave-entrance which opens to the east, the sounds change over time. When the sun shines directly in the cave, the sound material is at its strongest, fullest and brightest. Throughout the day and towards the afternoon and dusk, the atmosphere becomes increasingly fatigued.


Many thanks to curator of the Wendelstein Höhlenmediale 2015 Alois Späth, Wendelsteinbahn GmbH's Florian Vogt and Claudia Steimle, Peter Hofmann (geologist), Hannes Hoelzl and Alberto de Campo and members of the SC-mailing list for support in SuperCollider, as well as fellow artists Akitoshi Honda, Bastus Trump and Bartholomäus Traubeck.