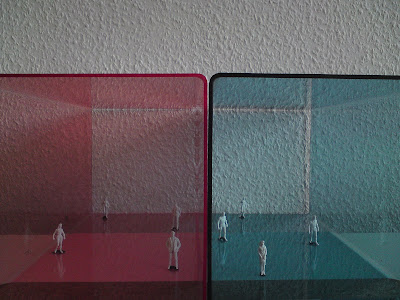 "SF capital is the synergy, the positive feedback between future-oriented media and capital. The alliance between cybernetic futurism and “New Economy” theories argues that information is a direct generator of economic value. Information about the future therefore circulates as an increasingly important commodity."
Kodwo Eshun paraphrasing Mark Fischer (Further Considerations on Afrofuturism)

The architecture of the Karl-Marx Allee (former Stalinallee) and Strausberger Platz embody the ideologies of the East German state in a strong and individual way, demonstrated particularly through its exemplary "Socialist-Realist" architecture and the historical city planning initiatives post-WWII. The American architect Philip Johnson called the Karl-Marx Allee "true city planning on the grand scale".

The work "The Science Fiction KAPITAL of Karl-Marx Allee" aims to capture and reflect upon the notion of "science fiction capital" as it would have been during the planning and building of the Karl-Marx Allee after WWII, where this vision of the socialist future was physically taking shape and affecting the minds and mentalities of the citizens of the newly founded GDR.

"Science Fiction" as a concept can be re-read in a "real" sociopolitical context, such as that of William Gibson's statement that science fiction is a means to preprogram the present, or in the words of Kodwo Eshun "engineering feedback between its preferred future and its becoming present". The core premise of science fiction, according to Samuel R. Delany’s statement, as offering “a significant distortion of the present” underlies this conceptual work, a one-day installation on 18th July 2010 (World Listening Day) at Strausberger Platz itself, which will be documented and exhibited afterwards.

The work "The Science Fiction KAPITAL of Karl-Marx Allee" aims to visually and auditively attempt to bring these ideas to Strausberger Platz. Visually, coloured perspex cuboids with tiny architectural figures are placed facing the fountain to exaggerate the feeling of proportion in the architecture and the historical future vision of the city planning of the GDR in the 1950s. Auditively, a black cube structure with emerging pipes of different lengths play a multi-channel composition based on various famous future visions as detailed in classic science fiction novels. One of these pipes simply begins and ends on Strausberger Platz, allowing the listener to hear the real sounds of the area with a uneasy root-tone drone. Through these pipes with varying root tones and the accompanying drone, fragments of these absurd futures emerge, a kind of science fiction story box. These varying notions of futurism, realist (through the architecture) and surrealist (through the story box) are laid side-by-side to make tangible, the political power within these fictional and factual visions of the future.

The story box is made in honour of Delia Derbyshire and her pioneering electronic works. 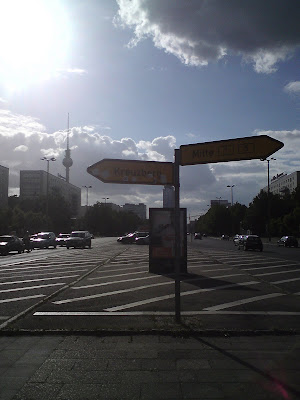 As Mark Fischer makes clear in his 2001 statement about "Science Fiction Capital", seemingly fictional propositions about the future in the form of science fiction movies are more often than not essentially political statements about the present. Taking Stanley Kubrick's 2001:A Space Odyssey as an example, he reflects on the "future" of past, as well as the bygone "present" climate of that past, in the real year 2001. How was the film perceived then and how is perceived now.

He marks out Marx's concept of capital in its fictional/abstract capacity:

"To map SF capital adequately you have to pit the humanist Marx against Marx the remorseless abstract cartographer of abstract hypercapital.The human-all-too-humanist Marx believed that capital was a fiction that could be cashed out as real value (=labour time).This implied that capital is primordially payment capital (money=time), and that finance capital is capital (only) in its alienated form.The problem is that since, on even the humanist Marx's own logic, capital is essentially alienated (i.e. capital is the discrepancy between 'itself' and human labour-time), it must be the case that the 'purest' form of capital is also capital in its most fleeting, virtual and abstract modes.

Insofar as Marx remained a humanist, he posited a transcendent use value that was distorted and masked by the ruses of capital. But use value - like all values - is no less fictional than capital. What is at issue is the temporal orientation of the fiction.The concept of use value is a retrospeculative fiction, both gesturing towards a 'future' that will never arrive (a time of judgement, when capital will be cashed out as labour-time) while also invoking a spectral 'past' that never happened (a time when needs and desires, culture and nature, could be securely delimited). Capital's apparent orientation towards the future, meanwhile, is 'speculative' only in the sense that it is immediately efficient. Examples of this latter process are now so commonplace they need hardly be enumerated: at the most simple level, borrowing money enables the capitalist to buy what used to be called the means of production, and - at the more vertiginously abstract end of the scale - the existence of a 'futures' market makes it abundantly clear that time itself is now for sale as a commodity."

Or as Kodwo Eshun somewhat more digestably puts it:
"SF capital is the synergy, the positive feedback between future-oriented media and capital. The alliance between cybernetic futurism and “New Economy” theories argues that information is a direct generator of economic value. Information about the future therefore circulates as an increasingly important commodity."
(Further Considerations on Afrofuturism, CR: The New Centennial Review - Volume 3, Number 2, Summer 2003, pp. 287-302)

What Eshun terms "The Futures Industry" has as much to do with the global finance market as with The Matrix and Men In Black, where statements about the future have primarily the present in mind. The "significant distortion of the present" (as described by Samuel R Delaney in the Last Angel of History 1995 and quoted by Eshun in above journal) that science fiction offers, can be read as a hyperstition (to use the vocabulary of the CCRU) - "fictions which make themselves real". The Futures Industry, encompassing the sensitive nature of global stock exchanges as well as Hollywood science fiction movies, are both full of these hyperstitions where any claim about the future has some kind of effect on the present, from the minutest and immaterial to the extreme, showing real material gains and losses.

The concept of Science Fiction Capital emphasises the crossover between fiction and capital, the point partly being about the monetary power of claims, that comes down to words and statements, about the future translating into money and secondly, the fictional nature of capital and as Mark Fischer says, of use value and all values.

The hyperstitious nature of Science Fiction Capital interests me the most in the way it bridges the relationship between the material and immaterial, between words and money.

Sonic Fictions as a form of Science Fiction Capital is also an interesting thought to take from Eshun's list above - Sonic Fiction Capital?? Would be something A&R of Universal, Sony and the like would love to get their hands on...
Posted by Annie Goh at 05:57 No comments:

"An ontology of vibrational force delves below a philosophy of sound and the physics of acoustics toward the basic processes of entities affecting other entities. Sound is merely a thin slice, the vibrations audible to humans or animals. Such an orientation therefore should be differentiated from a phenomenology of sonic effects centered on the perceptions of a human subject, as a ready-made, interiorized human center of being and feeling."(p81)..."An ontology of vibrational force objects to a number of theoretical orientations. First, the linguistic imperialism that subordinates the sonic to semiotic registers is rejected for forcing sonic media to merely communicate meaning, losing sight of the more fundamental expressions of their material potential as vibrational surfaces, or oscillators." (p82)... "Rather, it is a concern for potential vibration and the abstract rhythmic relation of oscillation, which is key. What is prioritized here is the in-between of oscillation, the vibration of vibration, the virtuality of the tremble. Vibrations always exceed the actual entities that emit them. Vibrating entities are always entities out of phase with themselves."

"If we subtract human perception, everything moves. Anything static is so only at the level of perceptibility. At the molecular or quantum level, everything is in motion, is vibrating. Equally, objecthood, that which gives an entitity duration in time, makes it endure, is an event irrelevant of human perception." (p83)

This is one of my favourite chapters in Steve Goodman's Sonic Warfare, where he also quotes one of my favourite ideas of Eshun's Sonic Fiction ("Far from needing theory's help, music today is already more conceptual than at any point this century..."). By bringing the discussion sharply away from the normative anthropocentric discussions on sound, such as the subjectivity of (auditive and other) human perception, such as "Sound Anthropology" is based upon or indeed how academic studies of music and also acoustics function, Goodman reduces sound to a mere "slice", a crossover between vibrational force and human perception. By entering this "quantum" or "molecular" level of analysis where everything is constantly in motion, it gives his concept of "unsound" an extra level of sorts. Unsound as "sound that cannot be heard" has already been defined as one of his three definitions of "unsound", but similarly to Eshun's statement about music vs theory above, where music exists and develops independent of theory (contrary to the beliefs of many theorists and critics), vibrational force is given its own autonomy independent of human perception, more or less contrary to our everyday human perception of sound. The result of this, as Goodman asserts, is importantly to reassess the semiotical attached to perceptions or at least be aware of this "linguistic imperialism".

In a way he creates in chapter 15 of his book a break, a jolt and a kind of philosophical drop and an anti-cultural studies stance which at least momentarily subjugates the dominance of human (auditive and other) perception as our basis of knowledge, a vital phenomenological paradox.

Not that I think Goodman is suggesting that removing human perception from his discussion on sonic warfare and sonic cultures is a feasible methodology, but this part of the discussion is critical in at least momentarily subtracting human perception from the analysis to examine the subject in its pure physicality. "Sound" as we perceive it, is vibrational force which existed in the same way it did in 13.7 Billion BC as it does today. To reach this endpoint in the middle of the book is important in sketching out the domain of the discourse of "unsound", critical for both the politics of perception (Virilio) and for the politics of frequency (Goodman).

The presentation of this phenomenological paradigm is attractive as it highlights critical problematics of the methodologies of cultural anthropology and some approaches within cultural studies regarding sound, where the conceptual framework of media studies is perhaps better equipped to deal with (for example Shintaro Miyazaki's "Algorhythm"). This is one of the merits of the concept of "unsound", exposing experiences of perceiving sound as just merely those vibrations which occur between 20Hz and 20KHz and considering vibrational force within its own autonomy.
Posted by Annie Goh at 07:51 1 comment: 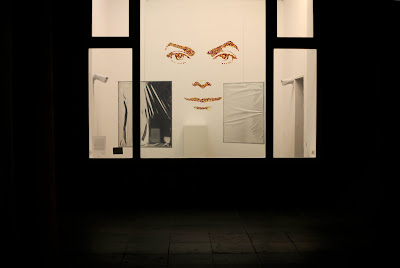 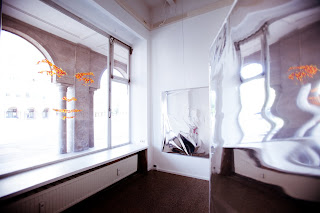 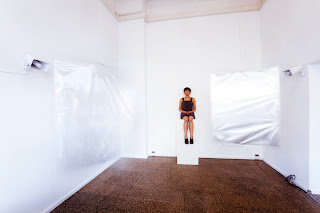