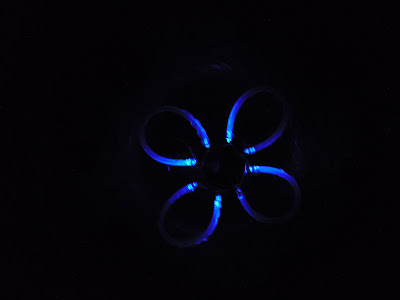 The Wobbling Moon Jellyfish, commonly known as the 'Wobble Squid' is a sea jelly that resembles a floating mushroom, closely related to the Aurelia Aurita or common Moon Jellyfish (dt. Ohrenqualle). Four horseshoe shaped gonads situated at the bottom of the stomach are a distinctive feature of the Moon Jellyfish.

In Eastern mythology, the jellyfish tried to deceive the dragon king Rinjin, who then beat him and pulled out all the bones of his body. Indeed, Moon Jellyfish possess neither bones nor brain, heart, blood, head, eyes or ears and consist basically of a floating mouth/anus and digestive system. Thus, the Moon Jellyfish can be appreciated for its simplistic anatomy and vengeful and poisonous nature.

In contrast to the common Moon Jellyfish, the Auralia Oscillia emits a low frequency oscillation perceived as a low wobbling sound as their sting cells or nematocysts prepare to emit poison in order to capture prey. This mutation is currently understood to function in the deep sea by stunning prey before stinging as an extra mode of attack. 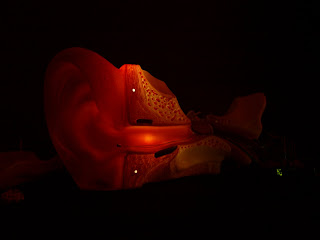 Otoacoustic emissions are sounds generated within the inner ear. They are considered to be related to the amplification function of the cochlea and are used clinically to measure the health of the inner ear. After being predicted thirty years previously, the existence of otoacoustic emissions was first demonstrated with the advent of suitably sensitive microphones by David Kemp in 1978.

The composer Maryanne Amacher (1938-2009) used otoacoustic emissions in her compositions, most notably in the album 'Sound Characters (Making the Third Ear)' in which she speaks of releasing the music produced by the listener as the sounds given stimulate new tones in the listener's ears.

The sculpture EMPATHY aims to simulate and exaggerate this physiological phenomena in an external, speculative way - a bodily organ becomes a specimen for examination, rather like the preserved organs in the medical history museum of the Charité nearby. A live sound feed, sensitive to the sounds around it, causes a reflexive movement in the cochlea and Organ of Corti of the enlarged ear model. This banal sound emitted by the sculpture is perceived as an involuntary echo of our ear mechanisms, reminding us of the constant empathetic relationship between our bodies and our surroundings.