Banality of Affect v1 is online:
[Some streaming issues still being solved...]

The Banality of Affect is an audiovisual installation and real-time net-art project which problematizes the commodification of emotions via new media and the ecology of (sonic) affect.

Data streams from Twitter and the Dutch stock market influence the emotional output of the music with a “corrective” function. This is undertaken by assessing incoming tweets from top five trance music DJs (Armin Van Buuren, Tiesto, Paul Van Dyk, Ferry Corsten and Sander Van Doorn) and five top news agencies (Reuters, BBC News, Russia Today, CNN and Al Jazeera). The tweets are assigned numerical emotional values (from -5 to +5), which are used to influence the euphoric or disphoric output of the generated music in real-time. Good news allows for more melancholic music, bad news enforces more euphoria. Fluctuations of the Dutch stock market alter the speed of the music; a turn for the worse increases the tempo, an increase in its value lets the tempo slow pace. 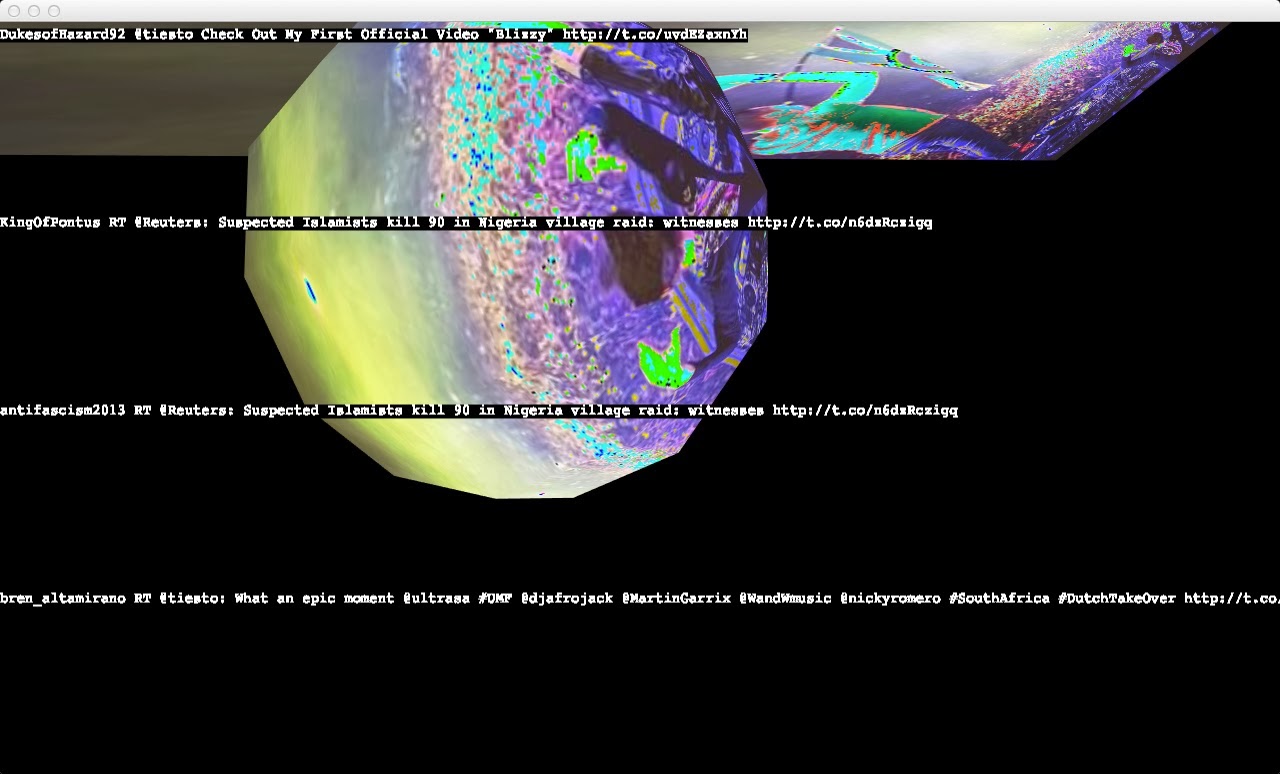 CTM2014 Sound, Gender, Technology – "Where to" with Cyberfeminism?


My contribution to this year's CTM Festival - CTM 2014 Dis Continuity:

Recent discourse on the subject of women and electronic music falls tendentially into two categories; either writing forgotten histories of pioneering work of women such as Daphne Oram, Elaine Radigue, Delia Derbyshire, Pauline Oliveros, Maryanne Amacher amongst many others, or with reference to the recent statistics via female:pressure, which highlight the huge quantitative discrepancies between male and female musicians, DJs, and producers represented at labels and music festivals worldwide.

Whilst both can be considered worthwhile approaches in their own right, the former approach risks creating fetishized figures of "patchbay nuns" (Abi Bliss) and the latter finds hostile responses and risks ostracization in its own field. In both, one fundamentally important aspect remains overlooked - Judith Butler formulated this as the necessity not only to inquire how the category of “women” might become more fully represented - for example here in music -, but also crucially to understand and critique the very categories and structures of power in which these discourses operate.

Taking root from an abstract ontological level, in which binary categories of sex and gender have long been refuted (biologically as well as culturally), the panel aims to assess the interactions between sound, gender and technology from various philosophical and artistic positions. The widely discussed "cyberfeminism" borne in the early 1990s questioned the perpetuation of technology as male-dominated domain, whilst also inciting digital culture as an ideal flourishing ground for subversive strategies. Though the relationship of this purported digital utopia never largely or explicitly addressed sound, it shares dimensions in its affective power as well as non-linear, decentralized and un-hierarchical characteristics.

Approximately two decades since cyberfeminism boomed - how can we assess the cyberfeminist dream of the subversive potentialities within technology in the current status quo? How does an inquiry into the nature of sound tally to the broader aims of cyberfeminism? Does a gendered understanding of technology and sound technologies help the dismantling of the structures that form sound, gender, and technology today, or does it perpetuate these? Referring to both levels of feminist activism and feminist theory outlined above, as well as the dual tendencies within cybernetics towards order and chaos at the core of cyberfeminism – what can be identified as continuity and discontinuity in the structures of sound, gender and technology?

Lectures:
Sadie Plant
Abstract coming soon.
Fender Schrade
Fender Schrade approaches live sound engineering through an artistic as well as a trans*feminist perspective. The talk will discuss the particularities of the agency of a live sound engineer and the interactions with space, bodies, technology and sound.
Susanne Kirchmayr
Susanne Kirchmayr will deliver insights into her praxis of sound production and composition. Drawing on her background in linguistics, her recent compositions have worked with human, often female voices to deal with themes of the disintegration of spoken languages, deconstruction, and reorganization of meanings and [grammatical] structures. In her presentation, she will also demonstrate her research into the musical potential of concurrent sequences with divergent timings in order to go beyond the scope of ordinary rhythmic synchronizations.
Marie Thompson
Marie will explore the relationship between constructions of femininity and noise, which is understood here as an affective transformative force, rather than simply as unwanted sound. She will suggest that ‘feminine’ noises are often deemed negative; not because of what they mean, but as a result of the transformations they threaten to induce. Marie will raise questions around essentialism – does talking of a feminine or feminized noise require us to adopt an essentialist position, or can an alternative approach be found?

Sound Knowledge
Rethinking Histories and Futures of Electronic Music – Keynote lecture by Tara Rodgers (via Skype)
Sat 1st Feb 14:00
Kunstraum Kreuzberg Bethanien
How do we know what we know about the history of electronic music, and how does this knowledge frame, and sometimes limit, approaches to the creative, technical, and social possibilities of music-making in the present? What knowledge might sound itself give us to live more mindfully and create more expansively?

This lecture draws upon feminist theories and archival research to explore these questions in the context of the CTM festival's theme of "discontinuity," which calls for challenging and presenting alternatives to existing histories of electronic music.

http://www.ctm-festival.de/festival2014/2014/02/01/programme/event/sound_knowledge/
[No recording of this at lecturer's request]
Posted by Annie Goh at 03:21 No comments: