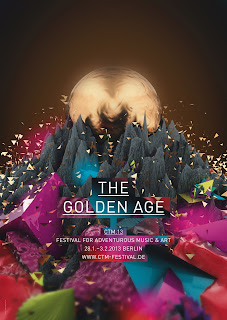 My contribution to the CTM.13 discourse & music program for "The Golden Age" this year was based around the idea "The Death of Rave" (as originated by V/Vm and revived in its own way by the Boomkat sub-label of the same name).

“The rave legacy no longer lives on, the corpse of rave bears no resemblance to those heady days in the late eighties and early nineties.”
V/Vm – The Death of Rave

Since V/VM's nineteen hour “The Death of Rave” project marked a nails-in-the coffin moment to the foregone UK-rave scene, as well as Burial's symbolic post-rave comedown and, more recently, Lee Gamble's dissection of old jungle tapes, a collective subliminal interest in excavating the sonic architecture of this period seems particularly rife. From the ebullient dissent of the outdoor hardcore and acid house raves, through the period post-1994's Criminal Justice Act which harboured darker variants of jungle, darkside, and drum 'n'bass, the sonic potentialities which unfolded themselves then have undeniably flowed strongly in the bloodline of UK music ever since. Using the “then” and “now” as points of flight, a complex social and musical ecology emerges in which, over a period of more than twenty years, musical aesthetic as well as substantial socio-economic, materialistic, and structural changes have become apparent. Drawing on debates on the “hardcore continuum” and “hauntology” as detailed by Simon Reynolds and Mark Fisher among others, The Death Of Rave focuses on the sonic cycle of death and rebirth, reflecting on the present and future of music via the past.

The accelerated vectors activated by rave and philosophy in the mid-1990s can be no-better represented than in the work of the CCRU (Cybernetic Cultural Research Unit). Although official word maintained, "Ccru does not, has not and will never exist," the work of Nick Land, Sadie Plant, and their graduate students at University of Warwick, which covered the nexus of theory, fiction, cyberculture, technology, and rave, continues to resonate strongly today. The sonic “conceptual apparatus” of jungle, which informed their thought, and the extreme intellectual productivity of the CCRU, invites examination as more than mere coincidence.

The unique conditions following the dramatic fall of the Berlin wall created the exceptional socio-political situation in which Berlin's techno scene was born. The euphoria of Germany reunited fuelled its infamous raves Tekknozid, Mayday, Tresor, and Love Parade, and saw the small parties of the early 90s grow to the global techno hub they are today. The inner workings of these early scenes have received in-depth historic interest, recently with Felix Denk and Sven von Thülen's book “Der Klang Der Familie” and Ulrich Gutmair's upcoming “Der Sound der Wende”. In the more than twenty years which have passed, the debate between “underground” and “mainstream” continues within a diverse sonic ecology while the recently hotly disputed GEMA tariff reforms currently threaten the existence of many of Berlin's clubs; as the city transformed into the dynamic capitalist metropolis it is today, the early DIY-days of illegal parties in temporary spaces seem distant compared to the regulated, administered spaces of many of Berlin's most famous clubs today.

QRT (Markus Konradin Leiner) was active in the mid-90s in Berlin. His anarchic media-theoretical writings were published posthumously on Merve. Similarly antagonistic towards the academic establishment as the CCRU in the UK, QRT's writings have hitherto remained somewhat neglected. His writings, inspired by Berlin's early techno scene as the electrification of archaic rituals, the body within the media-war, and the virtualisation of the present, question the current state of techno and techno-culture as part of today's changed discourses.

17:30 Virtual Futures: The Future Of Music

“We have gathered you here to bury the 20th century & begin work on the 21st. We are children of the 21st century & live already in the future unknown, uncovering every day vast new landscapes for exploration. We will not know the results of the tumultuous global changes we are undergoing and creating for a hundred years or more, if we can survive them, but we are less interested in knowledge than in experiencing these changes.”
Virtual Futures, 1995

The cybercultural narratives of the mid-90s provided a social, artistic, and philosophical framework to understand and challenge the rapid advances in the development of information communication technologies. Driven by a need to critique the framework underlying society’s newfound anticipation for the future, the Virtual Futures Conference held at the University of Warwick 1994–1996 brought together groups of renegade philosophers to lock horns with the future based on the provocations of evidence provided by the emergence of the Internet. At the time, the conference was affected by a turbulent dynamic between technological acceptance versus a largely paranoid technophobia. Fast-forward to 2013, and this has flat-lined to find the 21st century human docile to the widespread ubiquity of information processing technologies.

Meanwhile, human agency has been subsumed by an increasing automation by non-human agents, as control over identity, society, and economics is relinquished to biases of robotic processes. Techno-evangelism attempts to brand, market, and, most importantly, sell the wonderment afforded by a wilful obedience to the future. They resound with the same transcendentalist fantasies of cyberpunk fiction – indeed speculation and futuristic thinking has become an art, and like any popularist art forms, it has become an industry.

Revisiting 1995’s Future Music panel, Virtual Futures will explore the implications of a new ecology – where music is no longer made but grown, thus demonstrating a quality of artificial life. In 2013 music doesn’t go viral, it is viral. And all the while we are left to question who, or what, is listening?

In this specially commissioned audiovisual work, 0rphan Drift remix their rave-inspired works from the mid to late1990s. This period was characterized by a distinctly analogue, lo-fi materiality. Accompanied by audio from 0D’s Ocosi, Surface and Sadist, and by sound made for the 0D/CCRU 'Syzygy' collaboration in 1999, remixed by CCRU’s Kode9, this screening is a hallucinogenic immersive experience, a meditation on rave, techno culture, and its posthuman potentialities.